at rest pant, hiss and spit… as if they were real. 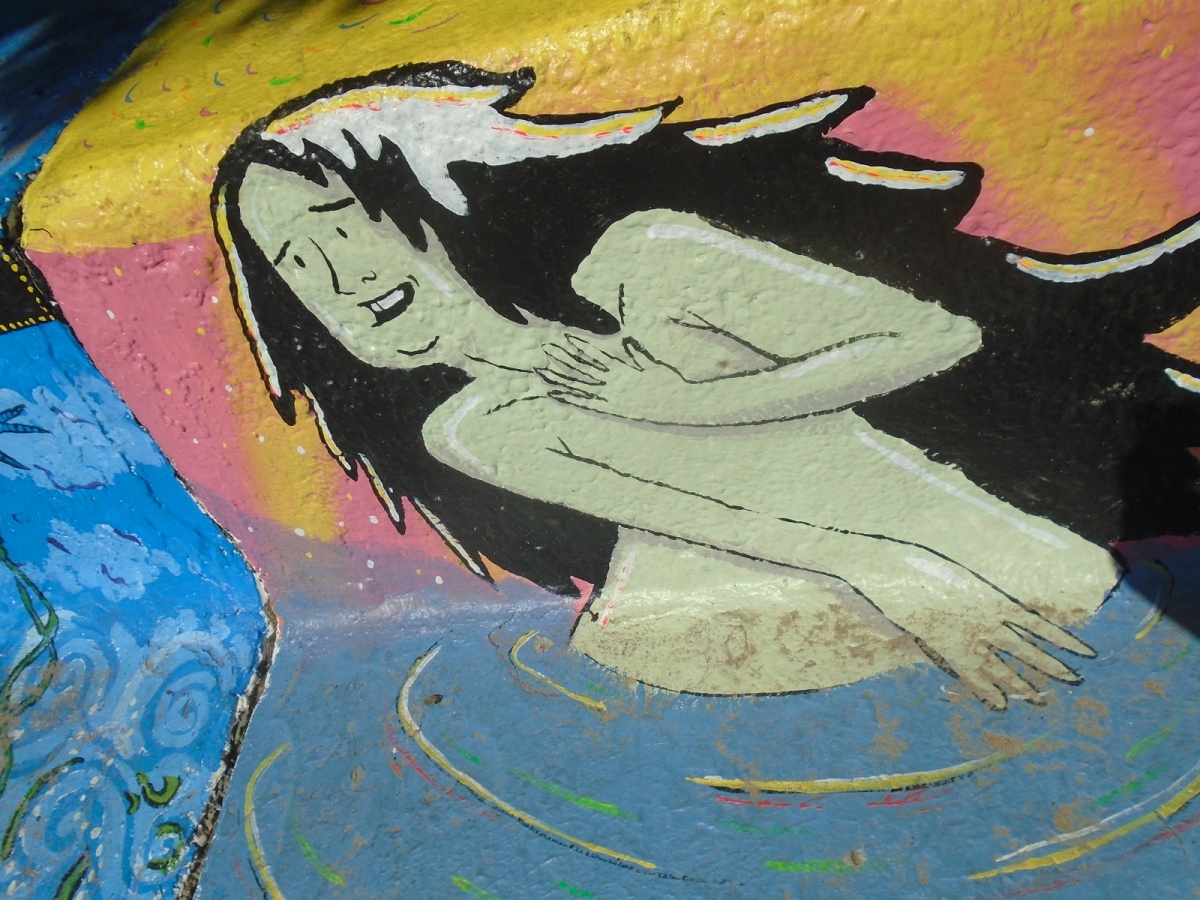 This is another panel from the 2022 Artists of the Wall. This one, I believe, was completed after the event as I do not at all remember seeing it when I took photos there a week after. There are usually a few panels that get completed in the weeks after, but then, befuddled by fumes of THC as I often am, how can I say for sure if this is one of them?

“Ou la la” could be an appropriate title. “La la,” I have read, is something one might say over spilt milk:

It is a dark and stormy night. The rain comes gushing down: A multitude of splats becomes a roar, the air a thousand concussions. A cold wind descends from heaven. Outside flickers with a sick florescent sky. Inside humidity makes the jar slick when returned to the fridge. It slips. It falls. It breaks in pieces: a half pound of coffee.

Thus back in the imaginary days of the Moulin Rouge, “ou la la” accompanied the choreographed display of chorus-girls’ underwear as an expression of mass mock dismay over a collective wardrobe malfunction.

Of course, that may all be so much horse feathers as “la la” is not exclusively dismay…

In a sense, this 7 minute video of incredibly beautiful tornadic violence is the video equivalent of academic field notes, no voice-over but with captions and music. I would nominate this as being Reed Timmer’s most spectacular storm video yet. You’ve got to see this, full screen and headphones recommended:

This video “uses zoomed-in 4k drone footage to analyze the complexities of tornado vortex dynamics, and especially the relationship of the tornado with the frictional surface of the Earth. We examine O-ring vortex structure with descending vortex breakdown bubbles, the intense jet-like vortices that form beneath these low pressure reservoirs, and the cyclical nature of all-of-the-above. We perform these analyses on the Andover, KS Dominator Drone footage from April 29, 2022. Never stop chasing.”

No: for real. These are ice clouds and it has nothing to do with it being winter. Up where these clouds float, water shivers and freezes, becoming cakes of floating ice crystals — which is, come to think of it, exactly what they would be if they were spread upon the surface of the beach or of the lake rather than tens of thousand feet above. Now listen for the crunch-squeak of giant feet walking in the snow above…

When you consider that part of my Dad’s job was to take weather readings at the local airport, I grew up remarkably ignorant of meteorology, even to the point of not realizing just how ignorant I was. Things haven’t improved much. I can tell you that the clouds in the photo are cirrostratus / cirrocumulus but I wouldn’t insist upon it as that level of confidence requires a kind of pattern recognition that is not one of my strong points, as I discovered when I tried to learn to recognize different woods by their grain (8th grade shop class, if you must know).

Those of you with a smattering of Latin should catch a distinct whiff of biology in the terminology and you’re right. The practice of cloud nomenclature largely stems from the work of 18th / 19th centuries “industrial chemist and amateur meteorologist” Luke Howard who did indeed borrow from the Linnaean. There’s only been one book-length biography of Howard that I know of, Richard Hamblyn’s 2001 The Invention of Clouds. I think I may reread it rather than simply reshelving it.

Here is the annual storm chasing anthology for 2021 from my favorite weather videographer, Pecos Hank (25:57):

It’s not all-weather, so to speak…

Something to look forward to… In this case, your memory of the future is being evoked by this image of a pleasant day in 2021 along Lake Michigan in Chicago’s Loyola Park.

(Swept up by tornadic winds in a violent thunderstorm, the vacant boat dock was shattered and deposited in a rain of debris miles inland where storm spotters had to explain what they meant when they reported: “It’s raining buoys!”)

I’ve not done any reviews lately, so let me pretend to do one by merely introducing you to a new product from the National Weather Service: the Winter Weather Liason. It’s experimental and maybe not fully functional, but a web portal to current winter storm conditions is a nice and useful idea, me thinks. Here is a screenshot of the home page on Friday, 12.31.2021:

Note that in addition to local radar and storm reports, it also has a page of strategic traffic/weather CAMS

I’m looking forward to how this site works today and how it develops over time.