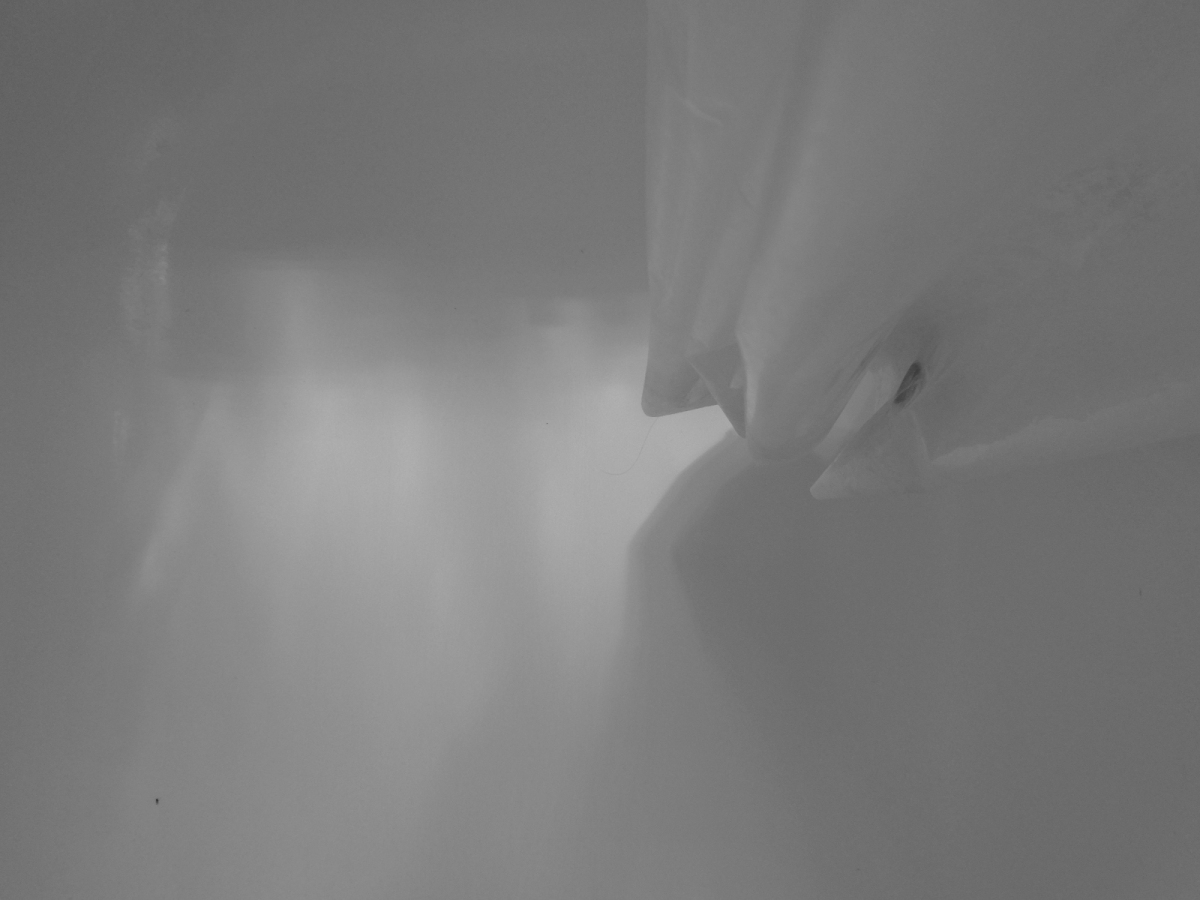 “Unshackled from time forever: memories and daydreams animate a day in the life of an elegant Italian grandmother. Directed by Maria Piva:”

This is from the Aeon Video Vimeo Channel. If you liked this, you should visit the site. I don’t think I’ve run across quite such an interesting list of titles…

When it awakens, it will fall in a blaze of color and smoke. Shhh. Let it be.

Some weeks ago, I posted a brief review of Jonathan Lethem’s new novel, The Arrest, wherein I noted a marked resemblance between his main protagonist, Alexander Duplessis, and Douglas Adams’ Arthur Dent in the Hitchhiker’s Guide to the Galaxy. Not long after, I decided to reread Neil Gaiman’s classic Neverwhere. This would not ordinarily be fodder for a review, but gosh! Doesn’t the protagonist, Richard Mayhew, resemble Arthur Dent? And the story is basically Hitchhiker’s Guide as well: The hapless anti-hero loses his comfortable place in the universe and confronts a series of frame-of-reference-shattering challenges before returning… home? By golly, once you see the blocks, telling a story is almost like building with Legos! If this were a proper review, a discussion of the underworld’s political economy would be in order and how that economy is of a type for certain fantasy, that is to say magical, stories, as well as its appeal to those who don’t quite belong. And furthermore, how should we recognize an Arthur Dent when we meet one: “Arthur Dent, I presume?” What bundle of traits, circumstances, character and tropes define an “Arthur Dent”? But this is a brief review, so I’ll end it by noting: Arthur Dent is everywhere, once you begin looking for him.

Once again, this is not a book I’d ordinarily review. Being but the latest in a series of police procedurals (the Rivers of London novels) involving magic (and magical institutions), it’s basically mind-candy that follows familiar conventions in both mystery and urban magic genres. As is typical of many mystery series, the Rivers of London novels focus on a particular character, Peter Grant, where each book is a challenge that evolves the character in a sort of life journey. And how did Peter Grant begin, in that first novel, Midnight Riot? As someone with a distinct resemblance to Arthur Dent?

No! Wait! There is another reason for reviewing False Value. Earlier this year, I noted how unions are so much not a part of science fiction. Well, you can add Aaronovitch to that short list of sf authors who at least mention unions. Take this line of questioning from the protagonist, Peter Grant:

“… Vampires were a problem, of course – they always are. You burn out one nest and another would pop up. Got real bad in the ’70s until a bunch of homeless vets went after them with homemade napalm and flame-throwers – quite a war by all accounts.”

“I was a teenager at the time, but the Association stayed out of it,” said Mrs. Chin. The Association being the New York Libraries Association, the militant magical wing of the New York Public Library Services. “Although we’re all members of the Green Machine as well.” That being the AFSCME, the union that most mundane librarians belonged to.

This is, I think, an act of mischievous dissonance. After all, magic is personal power, an act of will as well as incantation and calculation. Why should magical librarians need collective bargaining and solidarity? Are contracts magical? Is the magical vulnerable without the mundane? Well, this is a brief review so I’ll just note that this series of novels is one of those that is a) good if you like both police procedural mysteries and magical fantasy and b) best begun with the first of the books, Midnight Riot.

Driftwood is a collection of short stories masquerading as a novel and doing it quite well, thank you. The major difference in such situations being that as a collection, the author need not be so much concerned about closure, about bringing the whole edifice in for a landing at the end. Nor is the author confined to a particular few POVs. The stories, regardless of POV, all feature two characters: a guide / broker / informant / facilitator with an unnatural lifespan named “Last” and the universe that includes each story, “Driftwood”.

Driftwood is about aging and death. It is a constantly shrinking, constantly accreting amalgamation of fragments of different universes, each fragment being the remnant of a larger universe that has suffered some apocalypse. Wedged in with other fragments, they evaporate and shrink and settle toward the center of Driftwood where they, for a time, exist as ever diminishing parts of an urban shanty town, the Shreds. After all, when an organism (such as yourself) dies outside of extreme conditions, it doesn’t die all at once. Under the right conditions, individual cells might struggle along indefinitely. Heck, cells from your mother may still live within you. And ageing? We regress toward death, forgetting and losing, one by one. Or all at once.

Its worth noting that each of the fragments of Driftwood contains a particular culture and species of intelligence, often wildly different from their neighbors, but quaintly referred to as a “race” rather than as a “species”. This is an old science fiction practice that sometimes has a metaphorical function (aside from the fact that most science fiction aliens are humans in drag). In this case, “race” may be more apt as most of them can interbreed, and do: that being another characteristic that defines “the Shreds”. It’s not clear to me what Brennan’s point is except that it is likely also a part of the death metaphor. As is the character “Last”.

At some point, someone needs to write a compare-and-contrast essay about the political economy of fantasy novels… But I said that already, yes?

I always look forward to new writing by Brennan and am rarely disappointed.

For about 600 feet along the beach in Loyola Park, there is a concrete retaining wall / park bench that, some three decades ago, was a major magnet for graffiti, most of it distinctly inartistic if not downright threatening. What began as a housekeeping experiment evolved into an annual community institution: segments of the wall, freshly sandblasted and primed, were licensed out to whomever in the community wanted to express themselves. Make an event of it. And so they did. After missing 2020 because of the COVID plague, this year’s event was held over the June 19 – 20 weekend.

I don’t know the institutional history of the event. As it is in a city park, the Chicago Park District has been involved from the start, but there have been other institutional players involved in the past. Today it seems to be primarily the responsibility of the Park District’s Loyola Park Advisory Council.

Any complete history of the event is absent the web: no list of participants, no documentation of their artwork, no record of who “won” or when prizes first were awarded. The advisory council’s Facebook page has photos as far back as 2012. I’ve posted selections of my own photos from 2019 and 2018 and 2017. I’ve been photographing the wall since around the turn of the century, so you’ll find photos from earlier Artists of the Wall events scattered among the earlier posts on Yip Abides as the temptation to sometimes use them as illustrations was irresistible.

So here is my contribution to the cloud, a selection of complete panels or detail therein and by no means a complete record for the year, only of what I liked: 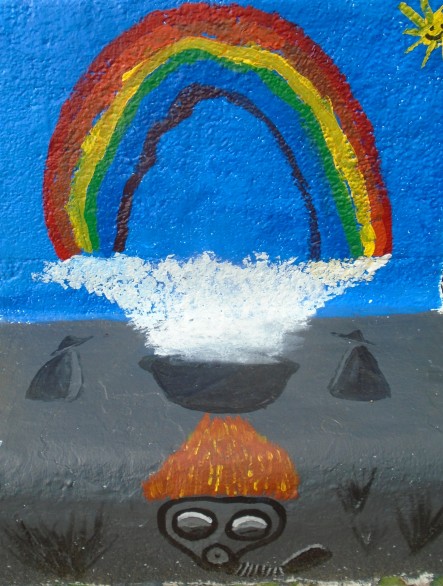 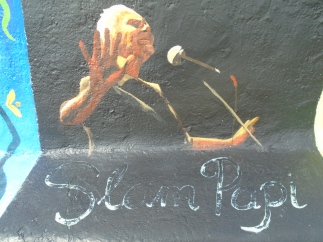 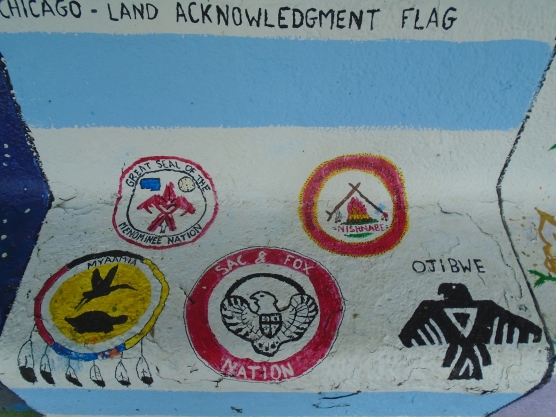 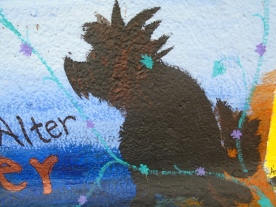 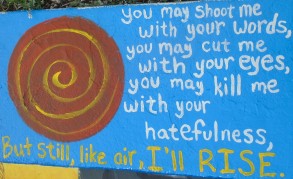 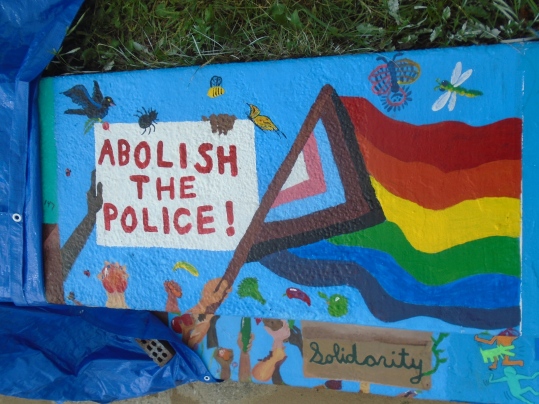 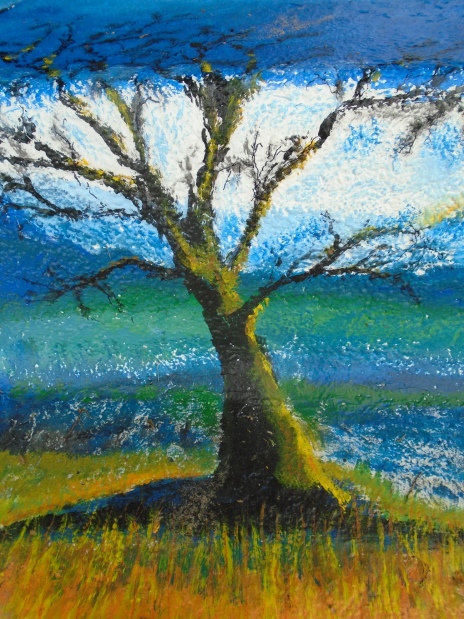 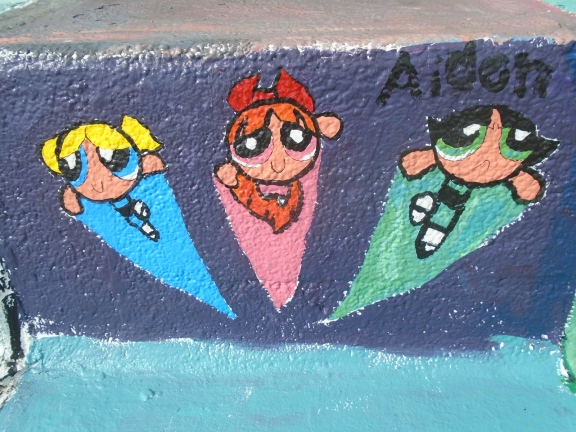 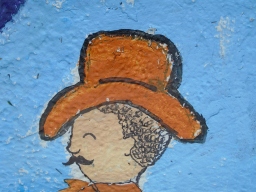 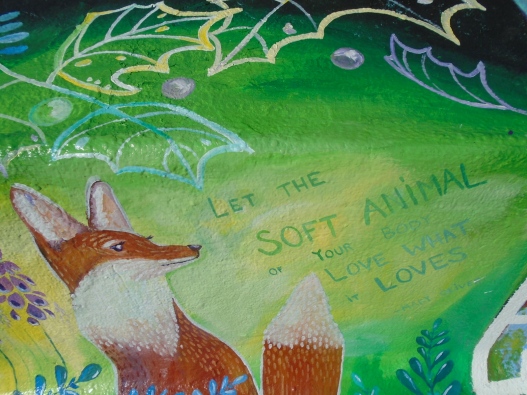 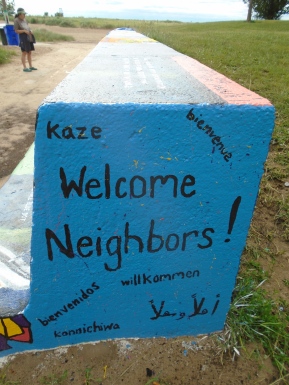 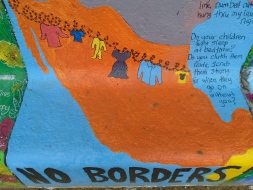 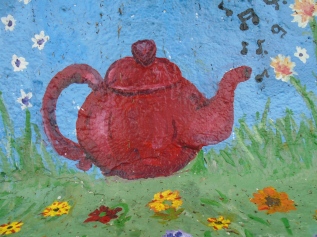 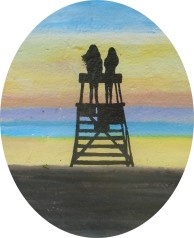 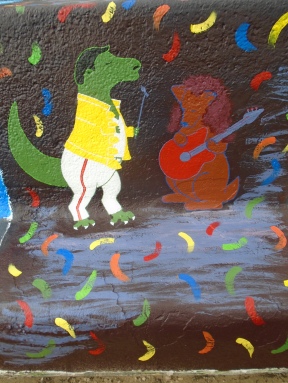 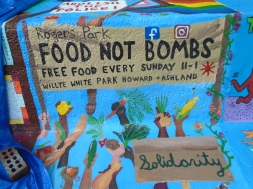 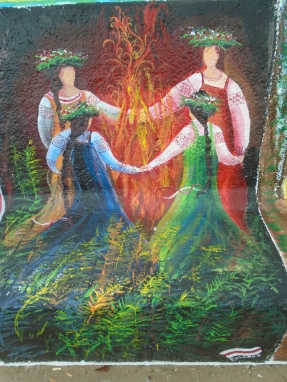 Tuesdays are my laundry days and so (as if I needed such a reason) here is another perspective on my laundry room. It also happens to be a room that includes at least three networks, maybe more depending on how you count them. The foreground is occupied by one of the past: the abandoned ends of three gas lines. The building does still use gas so there is no clue as to why these were abandoned. I find it picturesque in a rough and ready way.

Things change, after all. A few weeks ago, someone from management was showing two people some apartments, nothing unusual. In the courtyard I heard him say something like, “I’ve never managed a building with such a high proportion of common areas. The building really has great potential.”

They entered one of the entrances at that point, so there’s nothing more to be learned. But it seems to me a rather odd thing to say, particularly if one were showing the apartments to prospective rental tenants. I mean, “Stick with me kid; you ain’t seen nothing yet!” That’s a pretty weak pitch, one that pretty much rolls rather than flies across home plate.

But if this were part of a preliminary sales pitch for the building, it makes more sense. After all, in addition to the two garden apartments and machinery room and two laundry rooms, there’s room for a weight / exercise room, a bike storage room, a party room, maybe even an additional unit or two. Why, with those features, you could surely sell all the units of a hypothetical condo in a reasonable time, or if rental then maybe collect twice the rent. After all, you’re not just selling the accoutrements of a home but, more importantly, you’re selling a place on the pecking order, a place for the Karens of our country to feel more secure in the fearsome disorder of the world.

With any luck, I’ll be gone by then. But I’ve become such a peasant. 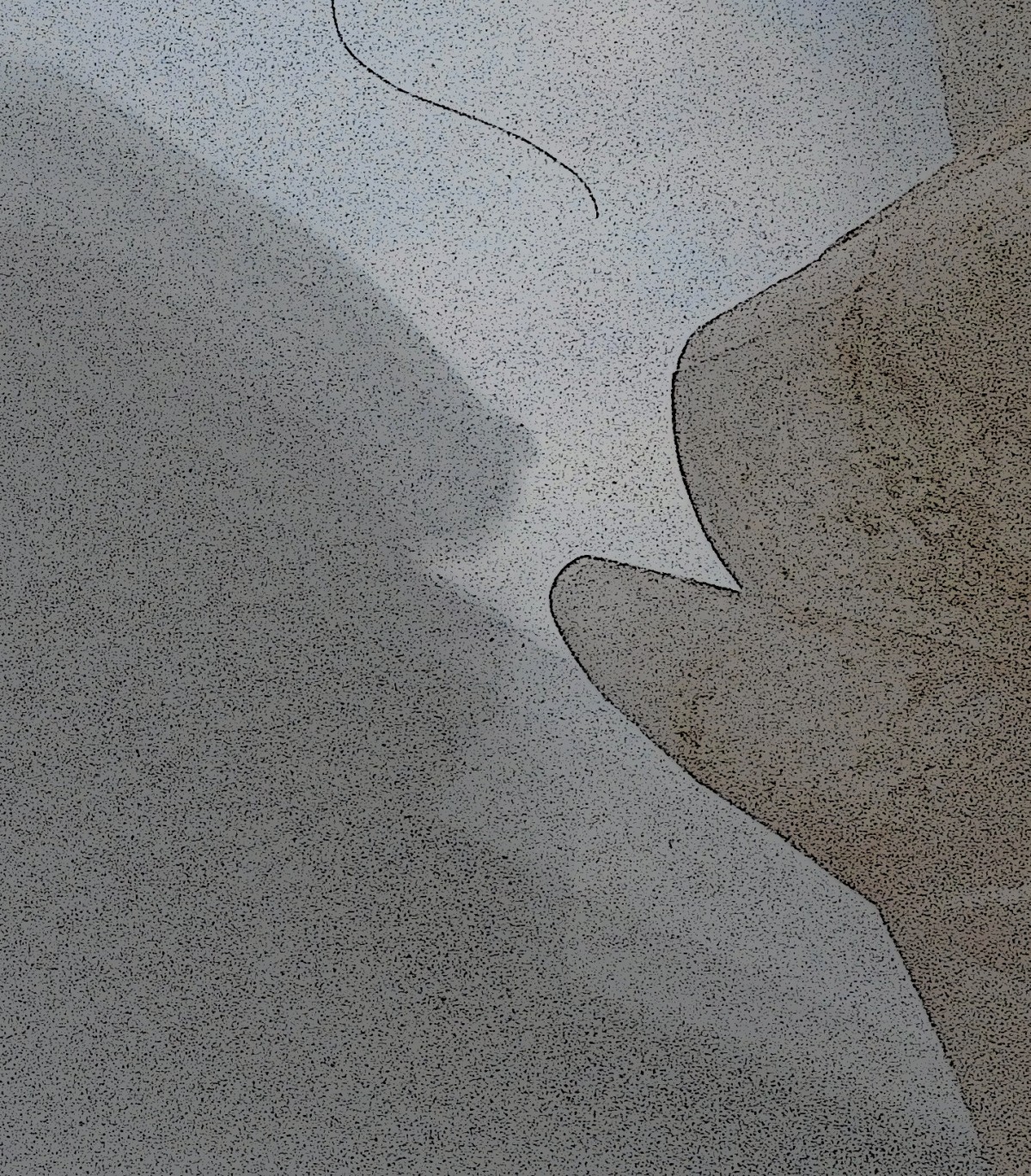