If you’ve not seen them, start here.

He told me so himself / Every morning at the breakfast table…

….Actually, throughout my life, my two greatest assets have been mental stability and being, like, really smart. Crooked Hillary Clinton also played these cards very hard and, as everyone knows, went down in flames. I went from VERY successful businessman, to top T.V. Star…. to President of the United States (on my first try). I think that would qualify as not smart, but genius…. and a very stable genius at that!

(With apologies to Uncle Bonzai.)

I was never a fan of the Panthers (nor the Panthers of me, assuming they’d have heard of me) but there’s much to learn from their experience.

constructed with stock footage by an ad agency

“A comedy about a father and son who work out their issues while battling a time-traveling killer android.”

We all live on the thin edge of disaster…

Full screen & turn it up

how his naked ears were tortured…

I’m not sure what to make of this… be careful what you wish for?

Back when I worked at a wallpaper warehouse, this is pretty much how I spent my evenings… somewhat less disastrously.

Looking south from the bridge at Goose Island and the Chicago skyline. The bridge in the picture was an active railroad bridge in 2004 but there are no longer any customers on Goose Island in 2018. Photo by Roman

Looking north from the North Avenue bridge. Photo by Roman 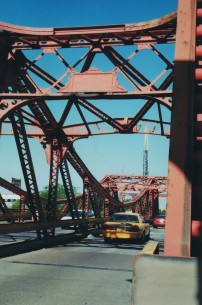 North Avenue is 4 lanes, mostly, except at a number of choke points of which the old bridge was one. The lanes were generous for 1905 but amounted to two one-and-a-half lanes in 2004. Photo by Roman

On the east end of the bridge, the builder plate gave credit to the actual builders. Photo by Roman

Close up of the gear works. I don’t believe the bridge had actually been raised for decades though there were still industries shipping by barge. Photo by Roman 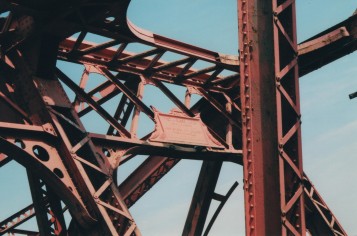 Lighting on the bridge. Photo by Roman

The builder plate on the west end of the bridge gave credit to the politicians and city officials. Fred Busse was Mayor. Photo by Roman 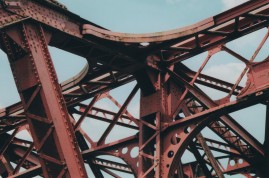 It was something of a commute from my place to and from the Chicago DSA office. Most often going home, I would take the CTA Blue Line south to Jackson and transfer back north on the Red Line. Sometimes I would take the North Avenue bus east to the Red Line’s North / Clybourn Station. If you could arrange to catch the bus with less than a 5 minute wait, you would at least break even on time compared to taking the Blue Line south. Depending on traffic, you might even save 5 or 10 minutes.

And sometimes I would walk North Avenue.

North Avenue was never particularly safe. In the 1980s, the main hazard might have been predatory jerks, the type who’d rob you with a gun. As the various neighborhoods along North Avenue gained in wealth, those jerks were largely replaced by jerks who robbed people with their pens. It’s difficult to actually do that with a pen on the street, so the main hazard was the sense of privilege that informed their driving. Other motorists may have been most at risk, but pedestrians had to keep an eye open too. There were homeless under the Expressway overpass and sometimes beneath the Chicago River bridge, but these were friendly… if you were friendly.

The builder’s plate lists Fred Busse as Mayor of Chicago. He was the first of Chicago’s ethnic mayors. All the previous mayors were of British extraction; Busse was German. Back then, Chicago election ballots had party labels; Busse was a Republican, having won the election against the incumbent Democrat Edward Dunne. Dunne probably deserves credit for the bridge as the contracting and construction began under his administration. Busse’s administration was noted for vice and crime, though it’s not clear to what degree Busse directly benefited from the corruption. He hung out at Murphy’s saloon, North Avenue and Clark Street.

The bridge was last lifted in the early 1970s. There continued to be commercial river traffic however: barges and tug boats equipped with retractable pilot houses.

There was, actually, a fourth North Avenue bridge. When the 1907 bridge was closed for demolition, a temporary bridge was built along side of it so as to not close North Avenue. As I recall it, this was largely a wooden structure with huge beams from what must have been impressive trees.

One morning on the way to the Chicago DSA office, I was stopped by a journalist and a videographer next to the temporary bridge. Did the temporary bridge frighten me, the reporter wanted to know. My reaction was that as a story, this was beneath contempt. In retrospect, I should have also asked if the assignment editor was pissed off at her.