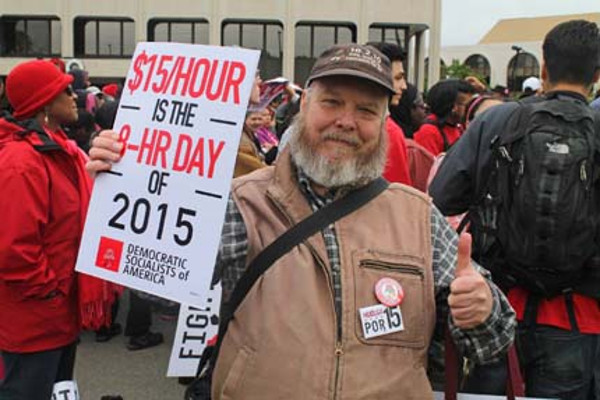 Tom Broderick is dead. Tom was very much of Irish extraction. One hates to deal in stereotypes, but in many ways Tom fulfilled his: an exuberant humor, a fondness for intoxication, a joy in friends and enemies. Enemies? As an activist, he was a frequent op-ed author for Oak Park’s Wednesday Journal. While reader comments were generally favorable, there is a constituency who will be glad his voice is now silent. Tom was happy to irritate them, and their irritation shows that they, in their own way, cared. And that maybe Tom’s arguments had more merit than they would like to concede.

He did, in fact, receive one death threat, but that’s not how he came to his end.

Tom was a friend of mine. We met because of our common membership in and activism in the Democratic Socialists of America. In particular, Tom became a leader in the Greater Oak Park branch of Chicago DSA. Tom and I worked on any number of labor support projects, notably the Congress Hotel Strike and boycotts by the Coalition of Immokalee Workers and the recent Chicago Teachers strike. We worked on supporting fair trade over free trade, the successful campaign to repeal Illinois’ death penalty, opposing America’s endless wars, campaigns for a living wage, campaigns for a LaSalle Street Tax and more. He was also a good, reliable contributor to Chicago DSA’s newsletter, New Ground. Tom was always a big reason why the Debs – Thomas – Harrington Dinner kept being held each year in this century.

Tom had spent a part of his youth wandering the world with not much more than lint in his pockets. It made for good stories over ale. I’d like to think that he’s back on the road again and some day we’ll share stories about Aldebaran or the Magellanic Clouds while passing the bong. I don’t see that the universe works that way.

... whatever ... View all posts by rmichaelroman